Welcome back to Part 2 of my Titanfall story! If you clicked on this story by accident or something, I recommend reading the first part of this story. Titanfall 2 is one of my favorite video games to come out in a long time, so I decided to write something to entertain myself, and hopefully you. This story follows Ernest “Slick” Daniels as he takes a group of young recruits on a routine recon mission but it turns out to be a hidden IMC base. They have to fight their way out and wait for help to arrive. Enjoy Part 2 and the conclusion, Part 3, should be out later this week!

Slick continued to pant heavily. After a few seconds, he stood up. The Legions were moving incredibly slow. But they were coming. Anderson pulled out his fancy Archer, a lock-on rocket launcher. He aimed, shot, and the Ronin was finished off with one shot.

“Maybe not. Let’s jump down into the riverbed, and head up the canyon that way,” Slick said. He wasn’t sure what needed to be done though. Defeating the Ronin was a personal accomplishment for him, but the end wasn’t anywhere in sight. If he led his team to the wrong location, another Ronin would teleport next to them in two seconds, and their organs would be splattered on the rocks. On the other hand, staying in the cave wasn’t smart either. The Legions couldn’t come in, but pilots could. The pilots could pop electric smoke, turn their Legion to autopilot, cloak, then kill everyone without ever being seen. It’s something Slick would have done, and he knew the IMC officers on this planet were furious he had just taken out a Ronin by himself. Without a doubt, Slick knew the heavy hitters were coming now.

They all jumped down and vaulted over the nearest rock. Slick hated when he was right. Staring them down at the top of the canyon was a Scorch. The Titan wasn’t alone though. Slick counted at least ten pilots perched on the rocks. Some with snipers, some with assault rifles. They began firing immediately. The Scorch, using his Thermite Launcher, blasted near the crew. Slick soon realized that wasn’t the Scorch’s main objective though. A canister spraying green gas flew with tremendous height and speed from the Scorch.

“Incendiary trap!” Slick yelled, but the trap exploded near the Scorch’s original marker. It exploded, covering four times the area the thermite launcher did. Juan, the younger of the Gonzalez brothers, caught fire on his arm. Instantly, he began to roll on the ground, screaming in pain. The rest of the team was forced to retreat behind the hull of their crashed ship. Juan continued to scream out in pain. Slick made a gesture to Anderson. Anderson understood. Slick had two electric smoke grenades in his suit. He took them out and threw them as hard as he could. They landed in front of the pilots. The Scorch though, was making his way down the canyon. Anderson was up next. He locked on the Scorch with his Archer. The Scorch immediately turned towards Anderson. When the Archer fired, the Scorch activated its thermal shield. The rocket was absorbed and burned instantly.

“Reggie, Hector, use your anti-titan weapons and target that Scorch. It can’t hold that shield forever,” Slick said.

Wide-eyed, they followed instruction. Slick noticed the fear on Hector’s face. His brother was wounded in front of him, screaming out in pain, a cry that could be heard over all the gun fire and explosions. Hector always seemed under control. Slick noticed the younger boys, even though they didn’t talk to him, they let their fear show, even when they had first met back at base. Not Hector though. Always that dry expression. If you saw him on the street, you wouldn’t be insane if you called him a serial killer. The emptiness in his eyes was unsettling. No doubt, he had developed that over the years. There were usually two types of people who wanted to join the Angel City Elites. The party boys, who lift too much for their own good. They beat up on their friends, show off for girls, and think shooting a gun secures their masculinity. They don’t last long, and if they make it past training, they are almost the first ones to die in battle. Then, there was everyone else. Hardened people who loved challenges. The ACES took on missions that others thought were crazy. They didn’t care though. Hector didn’t care. Now though, the fear in his eyes was noticeable. Slick didn’t want to let Hector down. Anyone would show emotion if they thought they were about to lose a brother. Especially a younger brother. Nonetheless, Hector fired away. 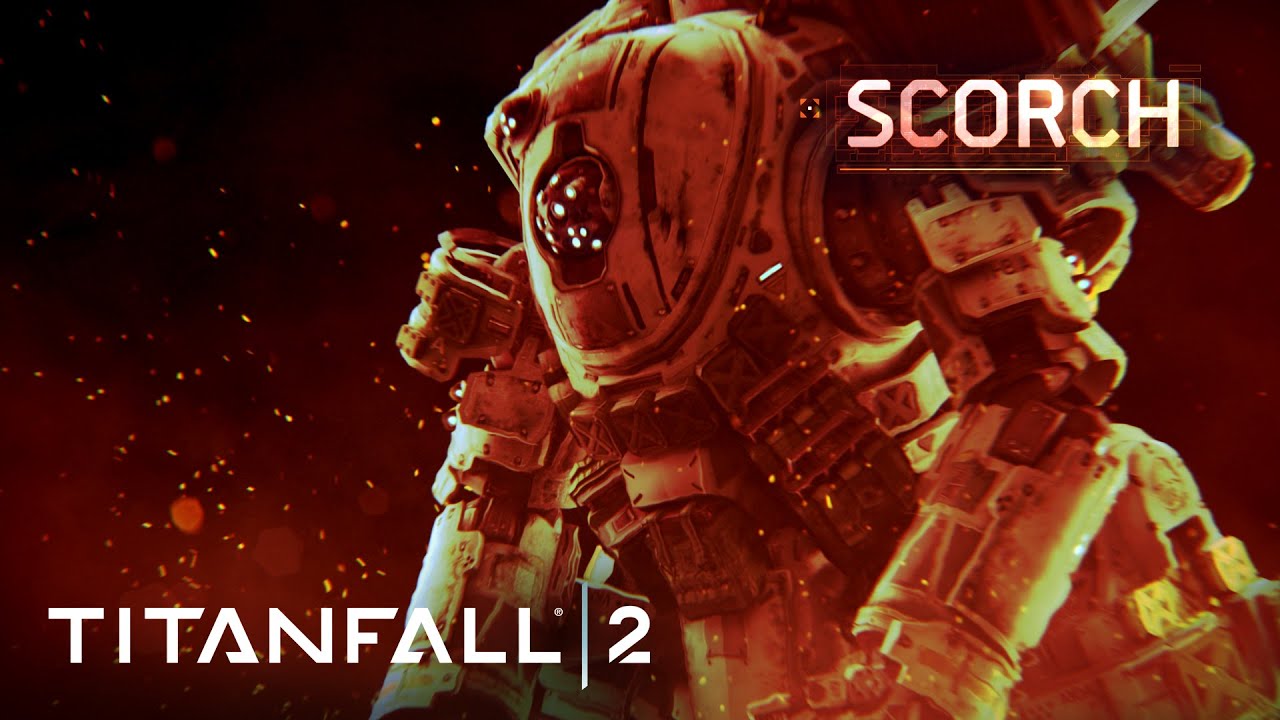 Slick grappled up near Juan. The smoke was starting to evaporate and the pilots had moved closer. Slick was close. Just as he was about to grapple next to Juan, he noticed the Scorch had turned its attention to them. One thermite later, and Juan Gonzalez was into nothing but ash. The explosion sent Slick flying back. He fell to the bottom where the rest of his team was. Hector screamed out in agony as he continued to fire his weapon. The Scorch was hurt, but still dangerous. They were forced to retreat back up to the cave. Legions had sealed off the entrance to the cave. They couldn’t reach Slick and his team, but they began firing their weapons. The sound was unbearable. Not only that, the bullets were sparking as they hit the rocks. 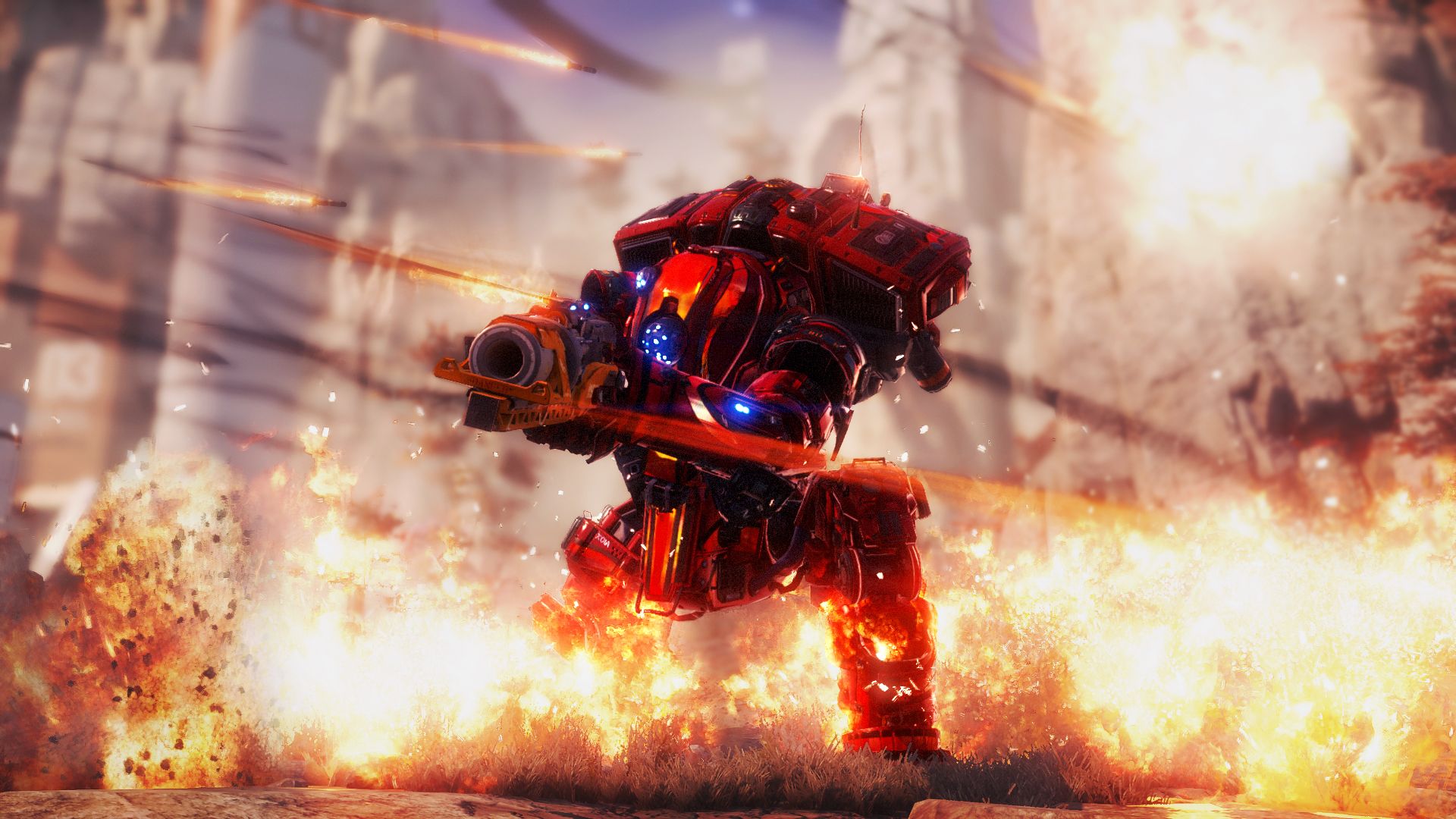 They’re loaded with EMP’s. Slick was confused. The only Titans with that technology were with the Frontier. It was one of the things they were hoping would win them the war. Disabling pilot suits during battle would change the scope of a battle drastically. Slick wondered how the IMC had gotten the technology. His thoughts were interrupted though, when he heard the Legion open. The pilot was out. Their suits were temporarily disabled. Slick knew what was coming next. He was anticipating the pilot coming into the cave camouflaged. Without his HUD functioning properly though, he had to spot the pilot with his own eyes.

Only ten seconds past. The Legion was still firing. Slick couldn’t see much. He couldn’t talk to his team either because of the noise. Just when he started to lose focus, he saw the pilot. The pilot saw him too. The pilot lunged, hitting Slick’s gun out of his hand. He foolishly tried to engage Slick in hand-to-hand combat. Hector was the first to react. He pulled the enemy pilot off Slick. Reggie then pulled out his pistol and put five bullets in the IMC pilot’s head. The Legion had stopped firing. It was searching the area now on auto pilot.

Pilots came to the rear entrance of the cave, by the ship. Anderson and Slick made quick work of them though.

“We won’t be able to stay here,” Anderson said.

Anderson shook his head. There was a clear look of defeat on his face. Slick didn’t want the younger recruits to see it.

“We keep fighting,” Slick said. “There’s nothing else we can do. Reggie, Hector, you two up to die like men today?” Slick asked.

“It’s settled then. Anderson, it seems you’re the only one who’s scared right now of a few IMC pilots,” Slick said trying to force a smile.

Anderson scoffed. He was about to say something when his suit came back online. So did the rest of the team’s. Anderson smiled and began cheering. He ran to the side of the entrance where the Legion was. He looked at his wrist, tapped it a few times and continued cheering hysterically.

“Our help is here, boys!” he yelled. “Time to kill these bastards!”

Four ships hovered above the canyon. Slick could finally breathe easy. Out of the ships, came every type of soldiers. Pilots, grunts, and even some robots joined the fight. They charged uphill through the canyon. Pilots jumping, kicking, and punching their way through enemy pilots. The Scorch had been destroyed by friendly Reapers. Slick’s helmet lit up. The display hurt his eyes at first. There was too much going on. Then, he saw her. He couldn’t believe it was her. For the last few minutes or so, Slick was sure he was going to die. But there she was. His old friend, Samantha, was on his screen.

“Nice to see you aren’t dead,” Sam said. Slick always kind of had a crush on the girl. No, she wasn’t a girl, she was a full-on woman. That’s why Slick had never made a move on her. He respected her too much. In his eyes, no man deserved her because no man was as productive and efficient as her. Everything she did in her life was with purpose. She had quickly rose through the ranks of the Frontier. She was officially known as the best tech specialist in the galaxy. Slick was honored she had helped him and his team throughout the years.

“Nice to see you too, Sam,” he said. He meant it too. She was beautiful. Her usual bright blonde hair was tied up in a ponytail. There was some type of dirt on her face too. Slick guessed she was working on a Titan back at base. Seeing her face almost made him forget they were in hostile territory on a planet no one knew the IMC had a presence.

“Your Titan is ready to launch,” she said. “Maybe don’t get it destroyed this time. I have some cool ideas I wanted to try on it when you got back.”

“Will do. Setting coordiantes now,” he tapped his wrist and lasered a spot on the ground that looked empty enough. Soon after, the Titan ship was hovering over the canyon. The battle was going on, but Sam had built shields into the Titans, so that when they drop, no one could get in except him. The pod came apart and he could see his Titan. It landed with tremendous force and the blue force field was instantly surrounding it. Slick jumped in. He disabled the shield, activated his weapons and began walking. The feeling of a Titan was something Slick loved. It responded so well and it felt like riding your favorite roller coaster. The Titan Slick had was a newer version. Some called it the most overpowered weapon used in the war. But that wasn’t true. The user is what mattered most and Slick knew that. His Titan, if used correctly, could steal energy from other Titans and equipment on the battlefield. Not only that, but it’s core was unique. It possessed three upgrades every time you activated its abilities. The upgrades depended on the pilot. But if Slick reached his third round of upgrades, which increased the longer the Titan was alive, then he was the most unstoppable force on the battlefield. 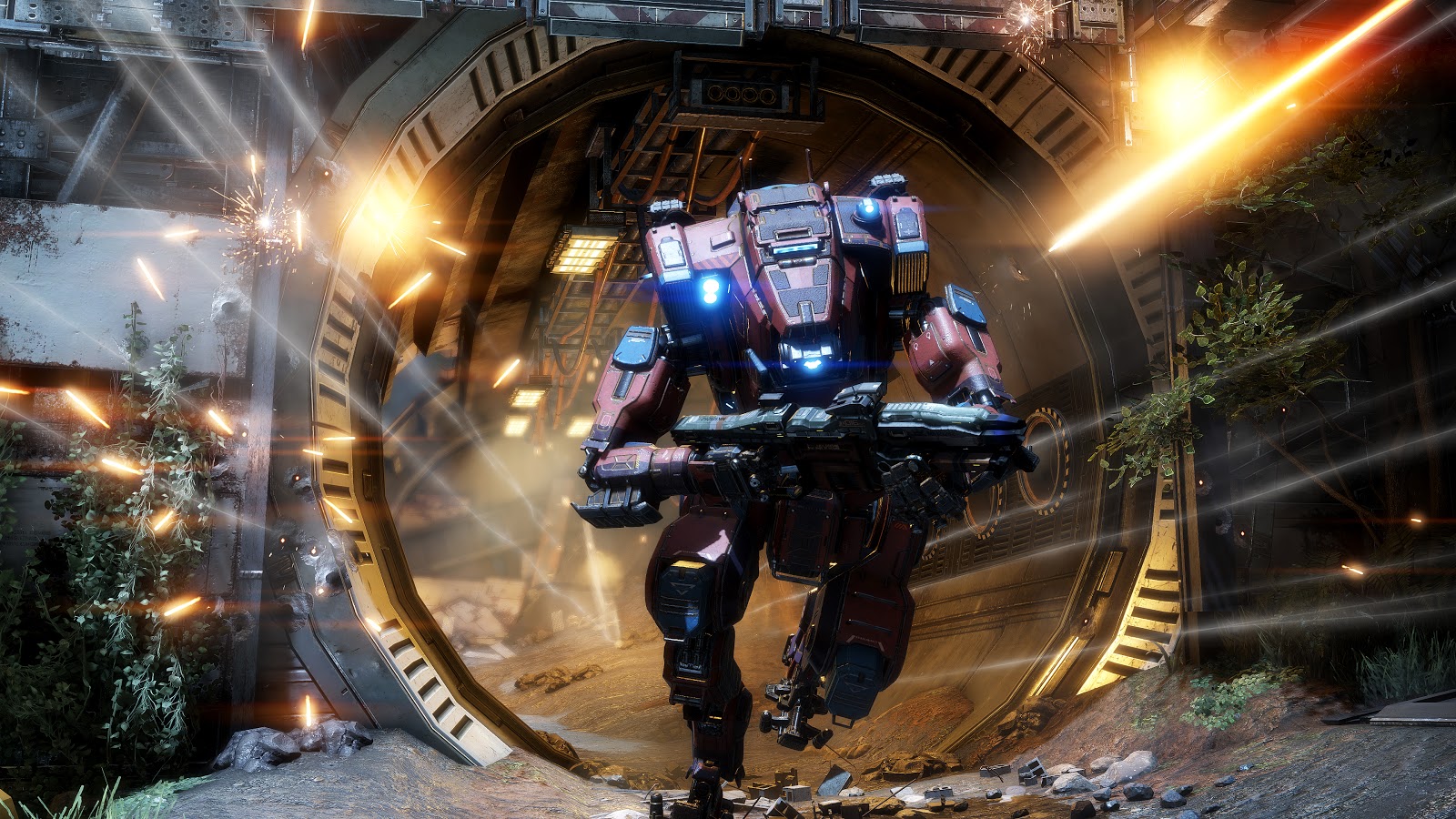 Samantha’s face popped up on screen.

“How’s it feel to be back in Monarch?” she asked.

“Give them hell,” she said smiling. It was a beautiful smile, as always.

“First upgrade will be ready in about three more minutes,” Sam said.

Slick didn’t respond. He saw a Scorch that needed to die…

Looks like Slick and his team are going to get out of the canyon. Will the frontier take the fight to the IMC or do those tyrants have more tricks up their sleeve. Part 3 is the end of this story and I’ll start a new story centering around a different map in Titanfall 2. Until next time, everyone! As always, Peace, Love, and Comics!!